Despite a recovery in the March quarter, superannuation funds are heading for a disappointing 2018-19 financial year, with global growth challenges and a loss of market momentum meaning funds will struggle to make up for sharp losses in the December quarter.

According to estimates from leading superannuation research house SuperRatings, balanced option returns were largely flat through March as markets were weighed down by weaker economic data and fears of further falls in home prices.

The typical balanced option (defined as an option holding between 60-76% growth assets) returned an estimated 0.8% in March as the share market recovery came to a halt. The typical growth option also grew at 0.8% following strong gains in January and February of 3.2% and 3.4% respectively.

While funds have recovered from a horror December quarter, a weakening outlook will make it challenging for funds to make up further ground before 30 June. According to SuperRatings, the estimated financial year-to-date return for the median balanced option is 3.2%, which so far ranks as the seventh worst result since the introduction of the super guarantee in 1992. 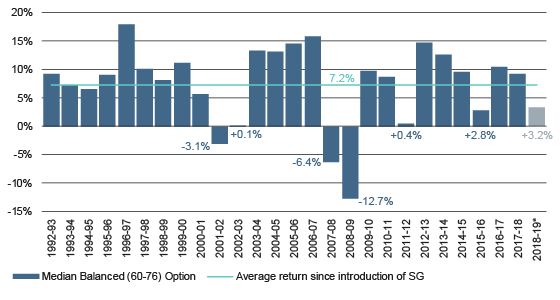 Meanwhile, the federal budget went largely unnoticed by markets, which had already anticipated many of the tax and infrastructure spending measures. Australians will head to the polls on 18 May, and while super is unlikely to be a defining election issue, there will be plenty of debate around Labor’s proposed changes.

“The federal budget delivered no surprises either for markets or for the super industry,” said SuperRatings Executive Director Kirby Rappell. “This is not a bad thing, because often the best thing a government can do is leave super alone.”

“The focus during the election will be on Labor’s proposed changes, which include reductions in contribution caps and the removal of imputation credit cash-outs, which will have a significant impact on SMSFs.”

“Falling house prices have a negative wealth effect that flows through to consumer spending, but they also throw a spanner in the works for many Australians approaching retirement who may have planned on downsizing and adding the windfall to their nest egg.”

25 Mar 2019 - Super members searching for a ‘sustainable’ investment fund are exposed to the same challenges as those in more traditional funds with the sector delivering ...

The cost of ‘sustainable’ super may not match performance