A combination of factors has created fertile ground for market volatility, resulting in a bumpy ride for super members, who have experienced six negative monthly returns over the past year.

According to SuperRatings, the median balanced option return for August was an estimated -0.5%, with the negative result driven by a fall in Australian and international shares. The median growth option, which has a higher exposure to growth assets like shares, fared worse, returning an estimated -0.9%.

In contrast, the median capital stable option, which includes a higher allocation to bonds and other defensive assets, performed more favourably with an estimated return of 0.3% (see table below).

Investors were caught off guard in August as trade negotiations between the US and China broke down, while a range of geopolitical and market risks, including further signs of a slowing global economy, added to uncertainty.

In Australia, a disappointing GDP result for the June quarter revealed a domestic economy in a more fragile state than previously acknowledged. Action from the Reserve Bank to lower interest rates is expected to assist in stabilising markets but could be detrimental for savers and retirees who rely on interest income.

“There will always be negative months for super members, but the timing of negative returns can have a real impact on those entering the retirement phase,” said SuperRatings Executive Director Kirby Rappell.

“For members shifting their super savings to a pension product, a number of down months in relatively quick succession will mean they begin drawing down on a smaller pool of savings than they might have anticipated. As members get closer to retirement, it’s important that they review their risk tolerance to make sure they can retire even if the market takes a turn for the worse.”

As the chart below shows, down months in the latter part of 2018 took their toll on pension balances, although they were able to recover through 2019 to finish above their starting value by the end of August 2019. 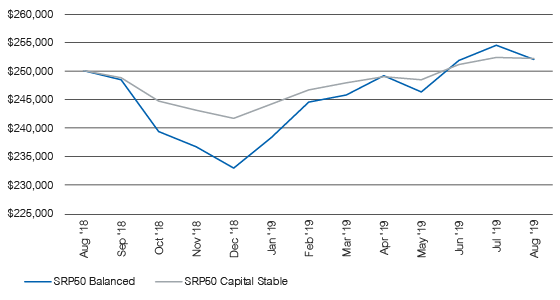 Source: SuperRatings
*Assumes a starting balance of $250,000 at the end of August 2018 and annual 5% drawdown applied monthly.

Comparing balanced and capital stable option performance shows that the balanced option suffered a greater drop but was able to bounce back relatively quickly. A starting balance of $250,000 fell to $232,951 over the four months to December 2018, before recovering to $252,091 at the end of August 2019.

In contrast, the capital stable option was able to better withstand the market fall, with a starting balance of $250,000 dropping to only $241,746 in December before rising back to $252,201.

While both performed similarly over the full 12-month period, a member retiring at December 2018 could have been over $8,500 worse off if they were in a balanced option compared to someone in a capital stable option. While a capital stable option is not expected to perform as well over longer periods, it will provide a smoother ride and may be an appropriate choice for those nearing retirement.

“Super fund returns have generally held up well under challenging conditions, but there’s no doubt this has been a challenging year for those entering retirement,” said Mr Rappell.

“Under these market conditions, timing plays a bigger role in determining your retirement outcome. At the same time interest rates are at record lows and moving lower, so the income generated for retirees and savers is less, particularly if someone is relying on interest from a bank account. In the current low rate and low return environment, it’s harder for retirees to generate capital growth and income.”

Copyright © 2019 SuperRatings Pty Ltd (ABN 95 100 192 283 AFSL No. 311880 (SuperRatings)). This media release is subject to the copyright of SuperRatings. Except for the temporary copy held in a computer’s cache and a single permanent copy for your personal reference or other than as permitted under the Copyright Act 1968 (Cth.), no part of this media release may, in any form or by any means (electronic, mechanical, micro-copying, photocopying, recording or otherwise), be reproduced, stored or transmitted without the prior written permission of SuperRatings. This media release may also contain third party supplied material that is subject to copyright. Any such material is the intellectual property of that third party or its content providers. The same restrictions applying above to SuperRatings copyrighted material, applies to such third party content.