Australia’s superannuation fund members have reason to expect a pickup in performance in the second half of 2018, following a volatile first half that saw super funds scrambling to recover from a global selloff earlier in the year.

SuperRatings’ data shows the median balanced option grew at an estimated 1.3% in June, bringing the June quarter return to 3.3%, ending the financial year on a high in what is historically the weakest quarter for superannuation.

According to SuperRatings’ analysis, super funds have historically recorded higher returns in the second half of the calendar year. Over the past 10 years, balanced options have delivered an average return of 1.9% in the September quarter and 1.7% in the December quarter. In contrast, the average return for the June quarter is only 0.9%, reflecting the historic seasonal impact on equity markets.

The results are even more exaggerated for higher growth options. For example, options with a pure Australian shares focus have an average return of 2.3% in the December quarter and -0.6% in the June quarter (see chart below). 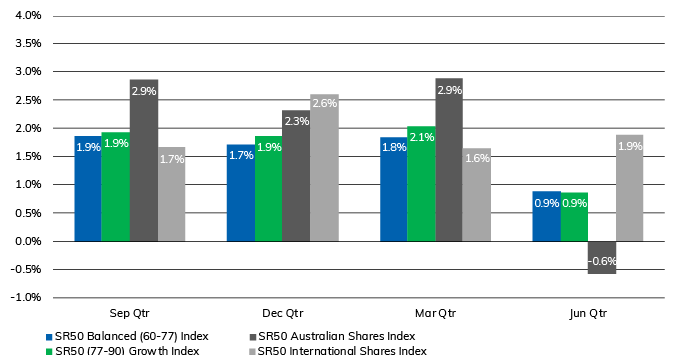 “Luckily this year investors forgot the old adage of ‘sell in May and go away’”, said SuperRatings CEO Kirby Rappell. “Instead we saw a strong recovery which ended up producing a very positive June quarter for superannuation.”

“If history is a guide, members can anticipate a bit of a kick in coming periods, although this is conditional on the management of some downside risks to the Australian economy, as well as the broader global growth picture.”

According to SuperRatings, Australian shares are set to move higher through the rest of 2018, but will likely continue to underperform global markets.

“With the Australian share market dominated by the banks, it is sensible to expect softer growth in the wake of the Royal Commission into Financial Services,” said Mr Rappell. “The Australian economy has a bit of extra baggage, including low wage growth and a cooling property sector which could impact sentiment, but overall our outlook is positive.”

Despite the comeback in the June quarter, the financial-year return for the median balanced option is expected to be in single-digit territory at around 9.2%, bringing the 5-year return to 8.9% p.a. and the 10-year return to 6.5% p.a. 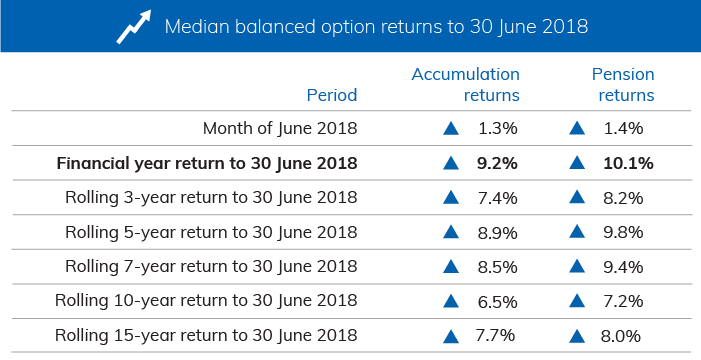 Interim results only. Median Balanced Option refers to ‘Balanced’ options with exposure to growth style assets of between 60% and 76%. Approximately 60% to 70% of Australians in our major funds are invested in their fund’s default investment option, which in most cases is the balanced investment option. Returns are net of investment fees, tax and implicit asset-based administration fees

Super funds continue to amass wealth for members, with the median balanced option adding more than 85% over the past 10 years, while members in growth options have seen their savings grow by over 90%. This is despite the significant drawdowns members experienced during the Global Financial Crisis, with balanced options taking nearly two years to fully recover. 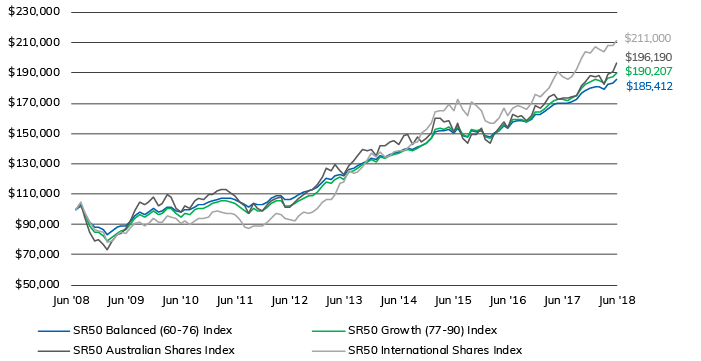 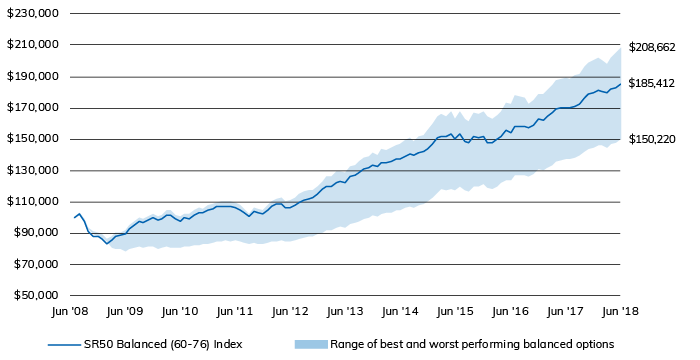 SuperRatings’ data shows HOSTPLUS was the best performing balanced option for the 2017-18 financial year, returning 12.5%, followed by AustSafe on 11.4% and AustralianSuper on 11.1%.

Over 10 years, the results show UniSuper narrowly moving ahead of both CareSuper and Rest in the balanced option rankings, while Equip has moved up into third sport. Each has returned well over 7.0% p.a. over the past 10 years, compared to the median balanced option return of 6.5% p.a. 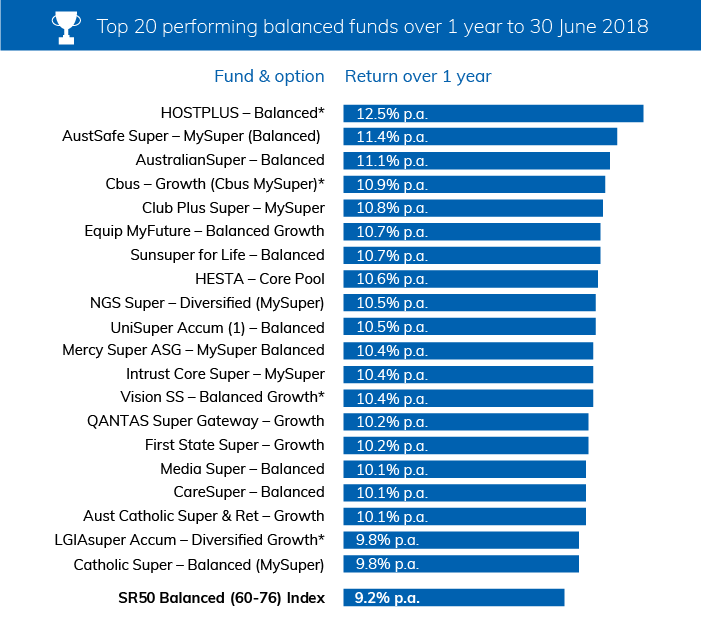 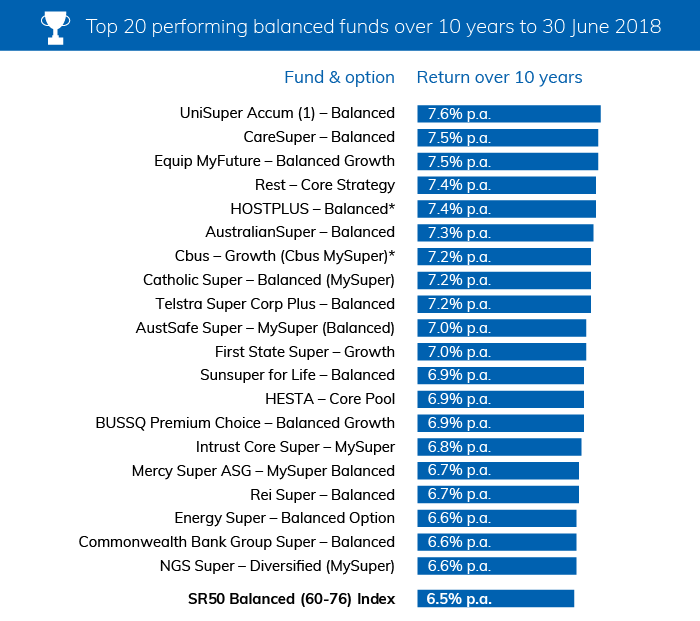 Warnings: Past performance is not a reliable indicator of future performance. Any express or implied rating or advice presented in this document is limited to “General Advice” (as defined in the Corporations Act 2001(Cth)) and based solely on consideration of the merits of the superannuation or pension financial product(s) alone, without taking into account the objectives, financial situation or particular needs (‘financial circumstances’) of any particular person. Before making an investment decision based on the rating(s) or advice, the reader must consider whether it is personally appropriate in light of his or her financial circumstances, or should seek independent financial advice on its appropriateness. If SuperRatings advice relates to the acquisition or possible acquisition of particular financial product(s), the reader should obtain and consider the Product Disclosure Statement for each superannuation or pension financial product before making any decision about whether to acquire a financial product. SuperRatings research process relies upon the participation of the superannuation fund or product issuer(s). Should the superannuation fund or product issuer(s) no longer be an active participant in SuperRatings research process, SuperRatings reserves the right to withdraw the rating and document at any time and discontinue future coverage of the superannuation and pension financial product(s). Copyright © 2018 SuperRatings Pty Ltd (ABN 95 100 192 283 AFSL No. 311880 (SuperRatings)). This media release is subject to the copyright of SuperRatings. Except for the temporary copy held in a computer’s cache and a single permanent copy for your personal reference or other than as permitted under the Copyright Act 1968 (Cth.), no part of this media release may, in any form or by any means (electronic, mechanical, micro-copying, photocopying, recording or otherwise), be reproduced, stored or transmitted without the prior written permission of SuperRatings. This media release may also contain third party supplied material that is subject to copyright. Any such material is the intellectual property of that third party or its content providers. The same restrictions applying above to SuperRatings copyrighted material, applies to such third party content.