A world-beating performance from Australian shares has been overshadowed by the re-emergence of geopolitical uncertainty and a wave of risk aversion in global markets, leading to softer performance for super funds in the final stretch of the financial year.

According to estimates from leading superannuation research house SuperRatings, the typical balanced option return was -0.7% in May as funds were dragged down by falls in international shares triggered by the re-emergence of the US-China trade conflict and uncertainty surrounding central bank policy.

The bright side has been the resilience of Australian shares and property, both of which saw a brief boost from the Coalition’s surprise election win, but this was not enough to save super funds from a month of negative performance.

Markets have since recovered following May’s weakness, but members should not expect a bumper end to the financial year. The year-to-date return is sitting at 5.1% for the median balanced option, which is below the 8.5% per annum return achieved over the past ten years.

Members in the median growth option, which includes higher weightings to growth assets like Australian and overseas shares, suffered a larger fall of 1.2% in May, while the median International Shares option fell 4.0% and the median Australian Shares option held firm, returning 1.4%.

“It’s been a disappointing end to the financial year for super, but long-term performance remains robust,” said SuperRatings Executive Director Kirby Rappell. “The median balanced option return over the past 10 years is around 8.5%, indicating that super has delivered solid returns even in a low interest rate environment.”

Downside risks to the Australian economy, including weak inflation, falling home prices, and tighter credit conditions are taking their toll on consumer confidence, while the geopolitical risks in the form of US-China trade negotiations have also contributed to market volatility.

SuperRatings Index return estimates to 31 May 2019 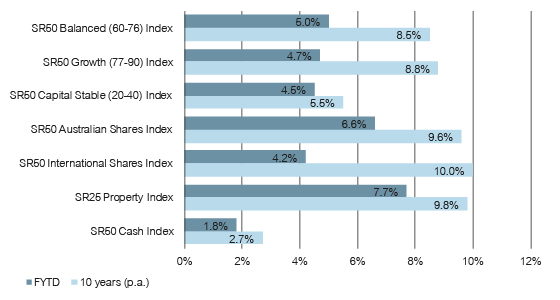 However, the Australian market has held up reasonably well over the financial year to date, with the S&P/ASX 200 Index returning 7.6% so far to the end of May, outperforming global share performance of 6.3% measured by the MSCI World Ex-Australia Index. Listed property has been the leading asset class so far this financial year, with the S&P/ASX 200 A-REIT Index returning 14.5%. Both property and shares saw a modest boost in May with the negative gearing debate now effectively put to bed following the federal election.

“Labor’s negative gearing proposals were thought to favour developers by limiting tax concessions to new stock, but so far the improvement in sentiment has outweighed any negative impact, which may give some super funds a temporary boost to their property portfolios,” said Mr Rappell.

The negative performance for super funds in May has been reflected in a slight fall in the Balanced and Growth option indices for the month but long-term performance remains strong. According to SuperRatings’ data, $100,000 invested in the median Balanced option in May 2009 is estimated to have reached an accumulated $217,391 today. 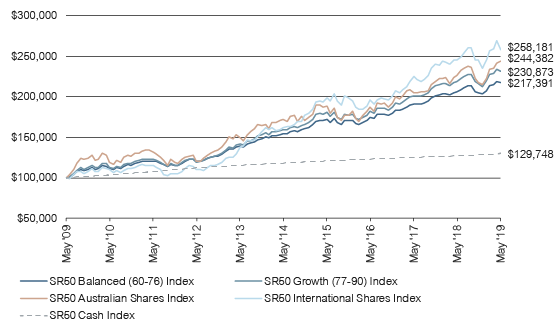