Super funds have failed to be rattled by the softening economic outlook, delivering solid returns in April and boosted by market momentum through early May. Despite yesterday’s correction, funds remain on track to beat expectations for the June quarter, which is historically the weakest period of the year.

According to estimates from leading superannuation research house SuperRatings, the typical balanced option return was 1.7% in April, mostly driven by gains in Australian and international share markets. This brings the financial year-to-date return to 5.3%, which remains beaten down due to large market falls in the December quarter.

Members in a growth option have enjoyed an even stronger result, with an estimated median return of 2.1% in April. The typical Australian shares option rose 2.3% while the median international shares option grew by an estimated 3.8%.

It remains to be seen if super funds can maintain their momentum in the final quarter of the 2019 financial year, but there are some dark clouds on the horizon that could dash hopes of a strong finish. Downside risks to the Australian economy, including weak inflation, falling home prices, and tighter credit conditions are taking their toll on consumer confidence, while the return of geopolitical risks in the form of US-China trade negotiations will also contribute to near-term uncertainty.

As the chart below shows, the June quarter has historically been the weakest for superannuation and tends to be a time when investors take profits and rotate out of equities. While markets have been risk-on for the past four months, there are signs pointing to volatility ahead, along with fears that markets have come too far too quickly. 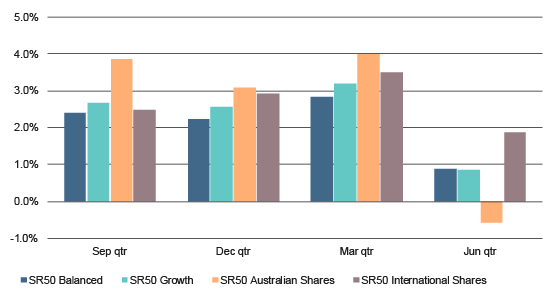 However, while there are reasons to be cautious, there is no guarantee that history will repeat itself.

“The Australian economy has entered the federal election in a relatively vulnerable position, but it’s not all bad news,” said SuperRatings Executive Director Kirby Rappell.

“We have seen strong performance from super funds since the start of 2019, and there’s no reason why this momentum can’t be sustained through to the second half of the year. But there are certainly risks to the near-term outlook, and members should not expect a bumper year for super returns.”

“Super is a long-term game, and those in the accumulation phase should not be too concerned about market volatility or periods of lower performance.” 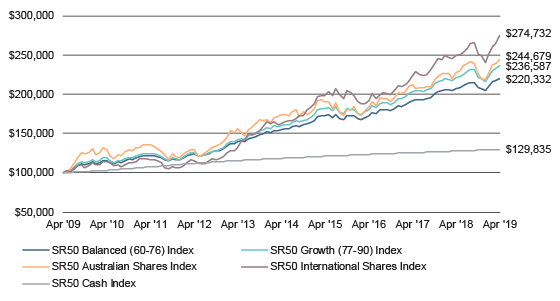