Australia’s superannuation funds are participating in the global share market rally, with big gains from US and European markets showing up in members’ accounts and providing a promising start to the 2018-19 financial year.

According to SuperRatings’ data, the median balanced option grew at an estimated 1.1% in July, while the median growth option delivered 1.3%. The results compare favourably to the average monthly return over the past five years, which is around 0.7% for both balanced and growth options, meaning super funds have entered the new financial year in good shape.

Australian shares continued to build through July, but it has been the significant outperformance of global shares that has provided the kicker to super returns. Super funds with global exposure have been able to take advantage of the strong momentum on the back of the US and European earnings season, which saw the SR50 International Shares Index jump 2.2% in July, compared to a 1.1% rise in the SR50 Australian Shares Index.

“Super funds have ridden a wave of positive sentiment over the past few months, and this has been reinforced by strong earnings growth, especially in the US and Europe,” said SuperRatings CEO Kirby Rappell. “Despite the imminent threats to the market rally, from trade wars to Brexit to the emerging economic crisis in Turkey, nothing seems to be putting a dent in confidence.”

Locally, share performance has been less impressive, in part due to the financial sector, which took a beating during the Banking Royal Commission. But the great strength of the super system is that it can diversify across different asset classes, including global shares, fixed income and property. 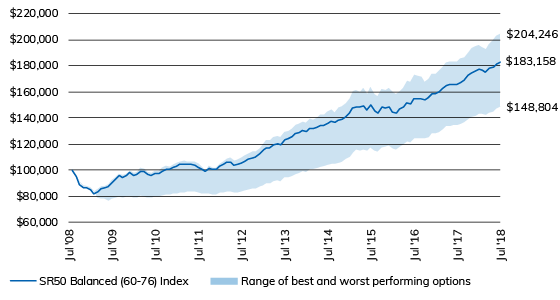 Ten-year returns remain impacted by the Global Financial Crisis (GFC), which began hitting super returns hard in September 2008. Over the six-month period between September 2008 to February 2009, the median balanced option fell 18.5%, while the median growth option experienced a drawdown of 23.2%. 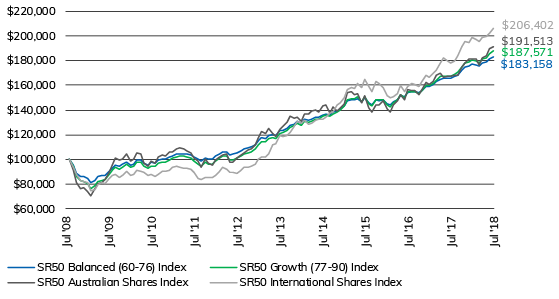 “The ten-year return figure includes the six months of severe pain for super members at the start of the GFC,” said Mr Rappell. “Once these acute negative returns fall out of the 10-year return period, we will start to see a noticeable lift, which will provide a truer picture of the health and stability of super funds over the long term.”

SuperRatings’ data shows HOSTPLUS was the best performing balanced option for the 2017-18 financial year, returning 12.5%, followed by AustSafe on 11.4% and AustralianSuper on 11.1%.

Over 10 years, the results show UniSuper narrowly moving ahead of both CareSuper and Rest in the balanced option rankings, while Equip has moved up into third sport. Each has returned well over 7.0% p.a. over the past 10 years, compared to the median balanced option return of 6.5% p.a. 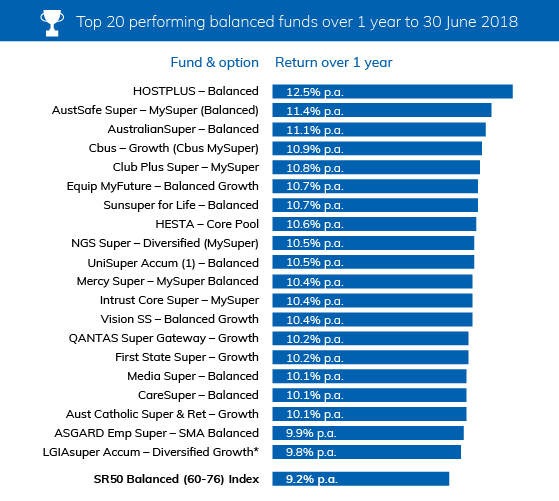 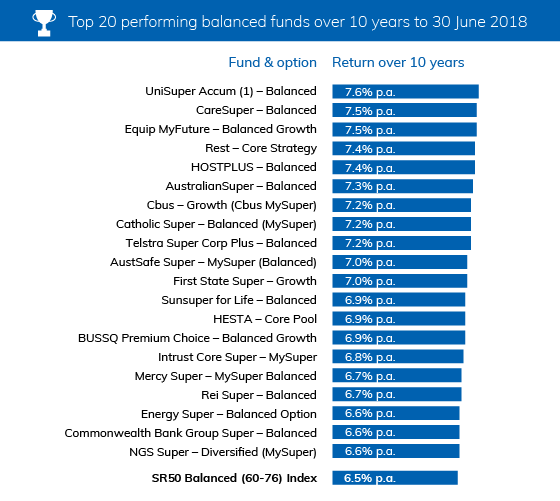